Hey there! I’m Bri. I’ve been living abroad in 7+ different countries for the past 8 or so years. I am a digital nomad and curious globetrotter with a BA in French and an MA in Humanitarian Aid. I fell in love with a Frenchman in college and we’ve since traveled to over 25 countries together, experienced culture shock as we’ve lived in diverse countries together, and even adopted a cat together, who now travels with us wherever we go. Read more about our story below! 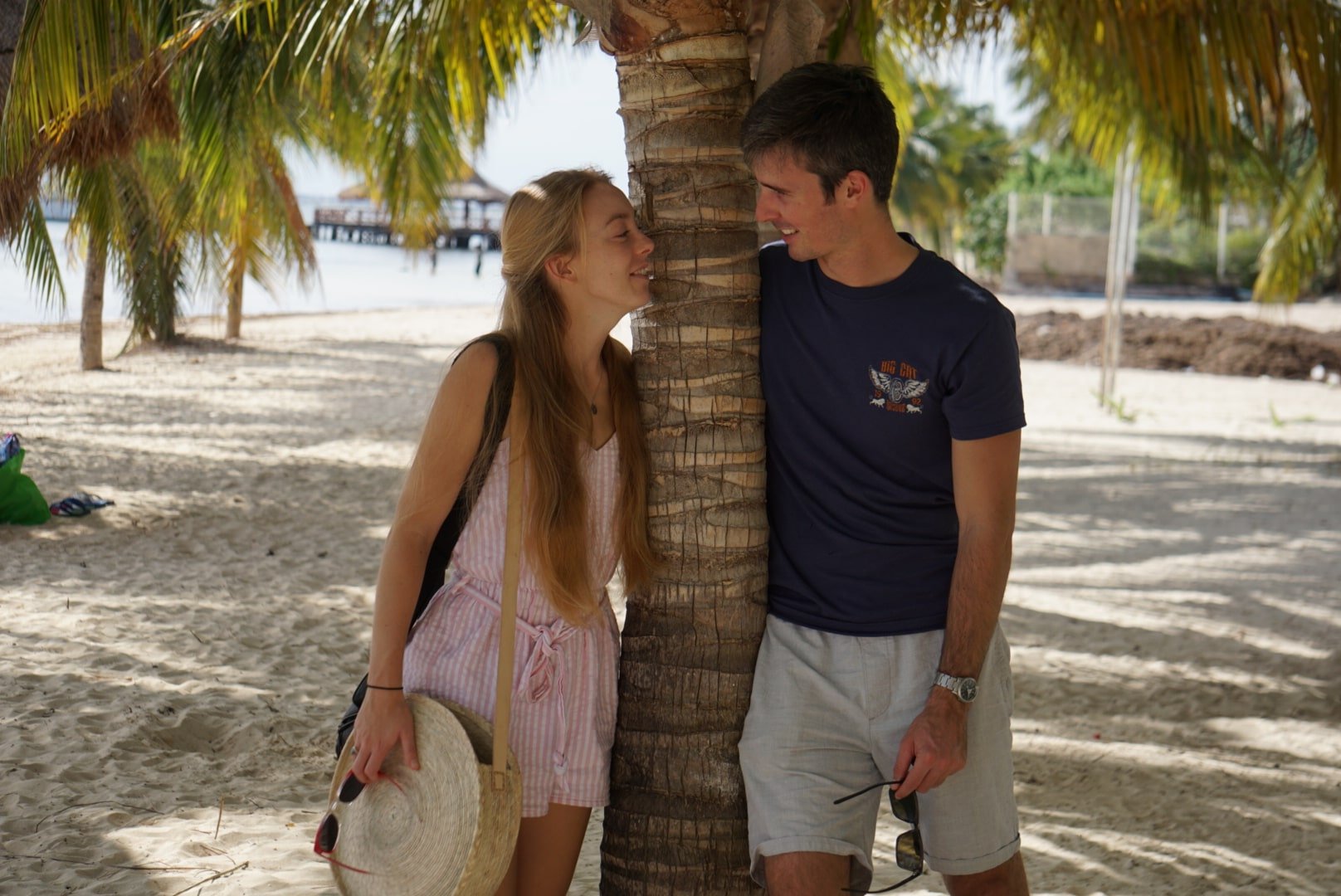 I’m the “Bri” part in Bucketlist Bri.  But you can also call me Brittany, BB, or Bribri (bree-bree).

My passion for travel and exploring other lands, languages, and people started when I was young. I attribute this wanderlust to a family trip to Belize when I was around 10 years old.

It was the first country I traveled to outside of my own and I remember this feeling of mystery, adventure, and adrenaline. I’m still chasing this feeling, now all over the world with a fluffy gray cat and a handsome Frenchman I fell in love with my freshman year of college.

Our story of love and travel has taken us all over the world. From the USA to Europe, back to the USA to Nepal, to Southeast Asia, to the US and Europe again, to South America, and so on and so forth.

My blog began in Nepal, although I started blogging on other websites when I was studying abroad in France for the first time. It’s taken me years to figure out my style of writing, whether it was to be pure storytelling and reflection, or travel guides or cultural food recipes, to my love of cats, and everything in between.

I wanted it to be everything all at once until I realized that wasn’t possible for me while I studied full-time and worked.

But my resolution for 2019 is to bring Bucketlist Bri (formerly Bits of Bri) back to life, by continuing to recount stories and share our experiences living and traveling abroad. I hope you’ll join me on this journey!

My Story in the Making…

I started blogging about the same time I first lived abroad – 2013.

I lived in France for 14 months, learning and soaking up the language and culture as much as I could alongside my partner Paul and traditional, country-side dwellin’ French family.

When the time came to go back home, my sister joined Paul and me in Europe for a very budget-friendly one-month backpacking trip. Going as far as our feet could take us (and our wallets) we stretched ourselves as thinly as possible to soak in the major sights of France, England, Amsterdam, Belgium, Germany, Austria, Czech Republic, Italy, and Greece.

July of 2014 finally arrived and I returned back home to North Carolina, where I finished up my senior year at the University of North Carolina Greensboro (Go Spartans!).

At the end of May 2015, with a degree in French and International Global Studies in hand, I felt my feet itching to explore something new.

To pass time until my next (and at the time unknown) adventure, I served as a waitress in a French breakfast cafe. I wasn’t even there for two full weeks before I told them, “Sorry guys, I’m moving to Nepal?”

Indeed – within a few short weeks, I whisked myself – and my 1-year-old adopted cat – away to live and study and work in Kathmandu, Nepal for two years.

Paul joined me one month later, and together we braced the culture shock of being in South Asia for the first time.

Fast-forward one chaotic year later through insane festivals, trekking the Himalayas, getting deathly sick, and meeting the most interesting people…

We left Nepal in April 2016 – our plans had been cut short – and so we went on a one-month backpacking trip through Southeast Asia – hitting up Malaysia, Thailand, Cambodia, and Vietnam.

I had enrolled in a new Master’s program (this time accredited) in Humanitarian Action that would take place in Europe – namely at my host university in Groningen, The Netherlands, and my specialization semester in Aix-en-Provence, France.

Keep in mind during this time I continued to blog on Bucketlist Bri – which started with the name Sharing Wanderlust and since has seen transformations into Living With Wanderlust, Bits of Bri, and finally Bucketlist Bri.

After my two semesters in the Netherlands and France, I left for my program’s third semester. This time I would be living and studying high up in the mountainous capital of Colombia, South America, in the bustling city of Bogota.

For three months I lived and blogged and traveled. I skirted across the hot desert north of Colombia to indigenous Wayuu towns, took part in my neighborhood’s volunteer community garden, and finally Paul (joining me at the very end of my stay) and I explored around the rich coffee plains in the Zona Cafetera.

I had one last task – well, two – in order to complete my master’s degree in humanitarian action. The last semester required an internship within a humanitarian-related organization – and I was accepted to intern at the European Commission for Humanitarian Aid & Civil Protection (DG ECHO) in Brussels, Belgium.

So Paul, Yoda, and I packed up Paul’s bright blue Clio car to the roof with stuff and road-tripped across Europe to move into our new apartment in wintery Brussels.

The months slowly went by as I finished up my Master’s Thesis and internship.

By January 2018 I was done. Just mentally done.

During these years I still kept blogging aside – but never thought about growing it into my full-time career.

When deciding where to go next, Paul and I agreed on somewhere warm.

And so a couple of months later, after a whirlwind wedding in India and visiting family in France and the US, Paul and I (and again, Yoda) flew to Puerto Vallarta, Mexico to live in a small beach-side town an hour north called San Pancho.

It was the first time ever visiting Mexico for the both of us. And as soon as we arrived we rented a car to head to our apartment which we rented for about six months.

San Pancho was a dream. There, we traveled, lived, loved, healed, and grew.

I learned aerial silks, worked in a local beach store, volunteered at the community center, made amazing friends, and drank a Corona or two alongside my favorite food ever. Tacos and nachos.

After countless hours earning money freelancing for others, I decided it was time to stop the side hustling and dedicate my time to building my brands – now Bucketlist Bri and my other full-time endeavor: The Fluffy Kitty – our blog about our lessons, guides, travel tips, eco guides, and general life with Yoda. And yes! I do earn money from my blog about cats (in case you were wondering!). 🙂 It was actually thanks to working for years through Nepal and Europe on The Fluffy Kitty that I was able to get by with rent and student loans.

The story doesn’t end with Mexico.

After living for over a year in sunny Mexico, we decided it was time for another adventure.

Yep, VAN LIFE. So we scoured the market and found an absolute gem of a van, right nearby in Puerto Vallarta.

It was a 1990 Roadtrek Popular. A beast at first sight, and clean as a whistle with only 92,000 original miles and absolutely no rust.

July 9, 2019 we left San Pancho late in the morning and took a 4-day road trip crossing Mexico and making it back to my family located in the hills of Tennessee and North Carolina.

We spent a fun-filled month working, relaxing, and vigorously dueling my sister and brother-in-law at Mario Kart.

But after one month it was time to hit the road.

Oh! I forgot to say to where.

To Canada, of course!

Which is where I’m currently writing this – at the table in the back of our van. Van Rouge The Roadtrek!

It’s been nearly two months now that we’ve been traveling in Canada – so far through New Brunswick, Nova Scotia, and now Newfoundland.

The journey has been nothing but adventure after adventure and we couldn’t be more thankful and grateful for the pursuit and the opportunity.

Where will we go next???

Our plans are to cross Canada all the way to British Columbia, where we plan to squat during the early winter months before heading down the West Coast of the USA and back again to…

We have no idea how long we will be living the #vanlife but I’m going to be documenting ALL of our travels here on the blog.

If you’re still reading this then WOW – thank you! I hope you feel inspired to get out and explore and to, of course, live a life of adventure.