It’s been a while since I’ve had the chance to write about our recent adventures.  There are many details that are skipped when one waits too long to write about their day. Nevertheless, this experience was the first kind of festivities I’ve experienced since my arrival in Nepal.  And there are many, many more to come.  This event marks the first time we ventured outside of Kathmandu.

Bhaktapur is renowned as a mystic city full of medieval arts and culture and is often called the cultural capital of Nepal.  It takes an hour or so to get there with the public bus, but it was no bother to us since we were seeing new sites along the way.  As each minute passed, we were slowly exiting Kathmandu Valley, and then the outskirts of Kathmandu.

Buildings were further apart and less in numbers, green rice fields began to stretch for miles; you could really see that the city is so developed compared to the rural countryside and what we saw doesn’t even compare to the real countryside, where people live without electricity and have no access to drinking water.

We arrive in Bhaktapur for the Gaijatra Festival.  Originally we had no idea what this festival represented, but we had heard rumors of wacky costumes, music, and dance.  Most of that was right, but we significantly underestimated the meaning of Gaijatra.

The Meaning of Gaijatra: A Cultural Lesson

“Gaijtra”, literally meaning Cow festival, is described (in my Gaijatra brochure) as one the most colorful and hilarious festivals.  (Hilarious? I wouldn’t have necessarily coined it as such but..)

On the day of Gaijatra, bereaved families in the city go around throughout the heritage route with a cow, or a girl or boy dressed like a sacred animal.  The cow is believed to help the departed souls wade in the cosmic sea on their way to heaven.  It is also said that this is the only day when the gates of the afterworld open for the dead.

Gaijatra last fors 8 days.  My brochure also says that throughout these days revelers in “outlandish dresses parade around the prescribed route, capturing and ridiculing at corrupt practices of public figures.” Hmm.. Not sure if we saw any of that… This is what I can account for though.  There were over 300 bamboo structures covered with colorful cloth, decorations, and pictures of the people who died during the earthquakes that tragically struck Nepal on April 25th and May 12th, 2015.

This year was indeed very special, as each person who died was represented with their picture on a bamboo structure.  What was so interesting about this festival is that it was joyous, people were having the time of their life; instead of mourning their dead, they were celebrating them.  They apparently try to add humor to the somber aspect of the festival so groups will be dancing, drinking, playing music, clashing sticks in a parade-like march (which we ended up participating in!) 😉

Gaijatra From My Foreign Eyes

We arrive in Bhaktapur, a new and strange place.  We have to pay $15 (foreigners rate) to get access to the center of the ancient city, “Durbar Square” or “Kings” Square.  As we waited for our new French and Nepali friends, we stood in the crowd watching the bamboo structures come and go, more and more round each corner.  We were breathing in 90% incense and 10% oxygen as people surrounded us burning incense sticks in their hands.  There were drums, jingles, and jangles, people in masks, or full of face paint.

The bamboo structures are cone-like reaching high in the air and carried by no less than four men.  Tied all around it was whimsical, colorful decorations at the center of which hung a picture of a man or woman that no longer walks this earth.

Some portraits were of the elderly, and some perhaps more tragically, were pictures of infants, children, and young adults.  It was deeply saddening, yet that feeling fades at the sight of how much fun everyone was having.  So we decided to have fun, too.

Finally meeting our friends they take us through the backstreets of the city, a shortcut to the main area.  We were led through small tunnels that went underneath the houses.  At one point we crossed an open area and all around us were destroyed homes.  It was the first time I saw so much rubble from the earthquake in one area.  Our friends told us that one week prior to the festival it was much worse; apparently, the city cleaned the streets of the hills of broken brick in preparation for the thousands that would celebrate the festival in Bhaktapur.

We reach the main square and I was in awe.  I’ve dreamed of places that had structures such as these.  I remember seeing these pictures on Google images and thinking “Oh, I can’t wait to see that in person,” then there I was, in person.  It was an ancient, enchanting place where culture just greeted you at every glance, yet at the same time it was sad; some structures and temples that had lasted for centuries were no more as if they disappeared into thin air.  Only pictures and memories remained.  In desperation to preserve what was left or on the verge of collapsing, the city put up wooden poles to “push back in place” the now tilted structures.  With time on our side, we crossed Durbar Square, observing the dances and chants the crowds around us were doing.  At a little side shop, we snacked on “curd” which is exactly what it sounds like.  It was like curdled yogurt that came in homemade little pots that we got to keep after eating. Sadly I left my little pot “curdle” even more after leaving it in my backpack for a week…Oops.

Shortly after that, we decided to get some real food. It’s so lovely having a native [local] show you around because they know where the best places are to go.  Through the tunnels we went, getting lost in this cultural and historic city.  We round a corner and our Nepali friend says “Here we are!” There was nothing that resembled a restaurant or a safe one at least! There was only a dirty curtain, behind which was a mystery until a few moments later we walked in. The 4 out of the 5 of us were foreigners; the most surprising to the men in the restaurant were the 2 white women.  Honestly speaking, we were probably one of the very rare women, or white people to enter that restaurant/bar.  Bhaktapur is a much more historic and traditional city than Kathmandu and women are looked down upon in society if they go out to bars or anything of the sort.  Knowing that explains why all the men were laughing when we walked in.

We were served a variety of small dishes: beaten rice, bbq buffalo meat, sandeko, potatoes, and not to mention a huge bottle of rice beer, which was very interesting and tasted like watered-down lemonade with a secret ingredient. The total price was around 350 Rs which seemed crazy to us.  The 5 of us drank and ate (snacked) for only $3.50. Pretty neat.  What was actually really crazy was the big dishes that sat on the “bar” area.  We were curious to know what each dish was, some were not so obvious to figure out but there were others that undeniably told you exactly what it was.  I’ve lived in France, so yes I’ve eaten weird things like cow tongue, frog legs, snails, and tripes. However…in these bowls sat: pure buffalo fat, brains that had been halved but kept exactly the shape, form, and curls that you would expect a brain to have, then gigantic tongues that looked like they just had dropped from the animal’s mouth, raw grounded buffalo meat, and the list could go on.  Yum.

As we pushed our way back through the crowd, dodging dancers clashing sticks to the beat of the drums, we were suddenly stopped by a Nepali TV reporter.  They were filming live at the festival and were asking random people questions about what it was like being there.  At one point during our “interview”, he told us to turn and wave at the camera that was higher up on the steps of the temple that no longer stood, which was now decorated with tons of people, like pigeons crowding together on rooftops.

We bought some sturdy sticks to join in on the dancing parade that circled the city.  You would partner up with the person parallel to you and after a repetitive beat, you would *bang!* clash your sticks together and then the beat would quicken and you’d alternate clashing with the person behind you and next to you.  Every now and then we would get trampled on by the rowdy crowd or have water thrown all over us from water bottles flying in the air.  People were hyped, screaming and chanting the same thing at every cycle of the dance.  You repeat the same thing, continuing all the way through the streets of Bhaktapur.  After an hour of being pushed and shoved and sometimes “accidentally” hit, we had enough dancing and banging our sticks for one day. Nevertheless, the parade continued all the way until evening.

Sore and at this point burnt, we visited our Nepali friend’s house.  Their original house was flattened by the earthquake and the one we visited that day had no walls, only tarps, and blankets to separate the inside from the outside.  Their hospitality never faltered, however.  It always amazes me how much people can endure and still be so giving.  Nepalis are usually known for their hospitality and that day it proved to be more than just a stereotype.

Our Gaijatra festivities ended with a walk across the dusk-lit city to the bus stop.  We barely had time to say goodbye to our friends as the bus was already moving by the time our feet reached the steps.  What a crazy and exhausting day. 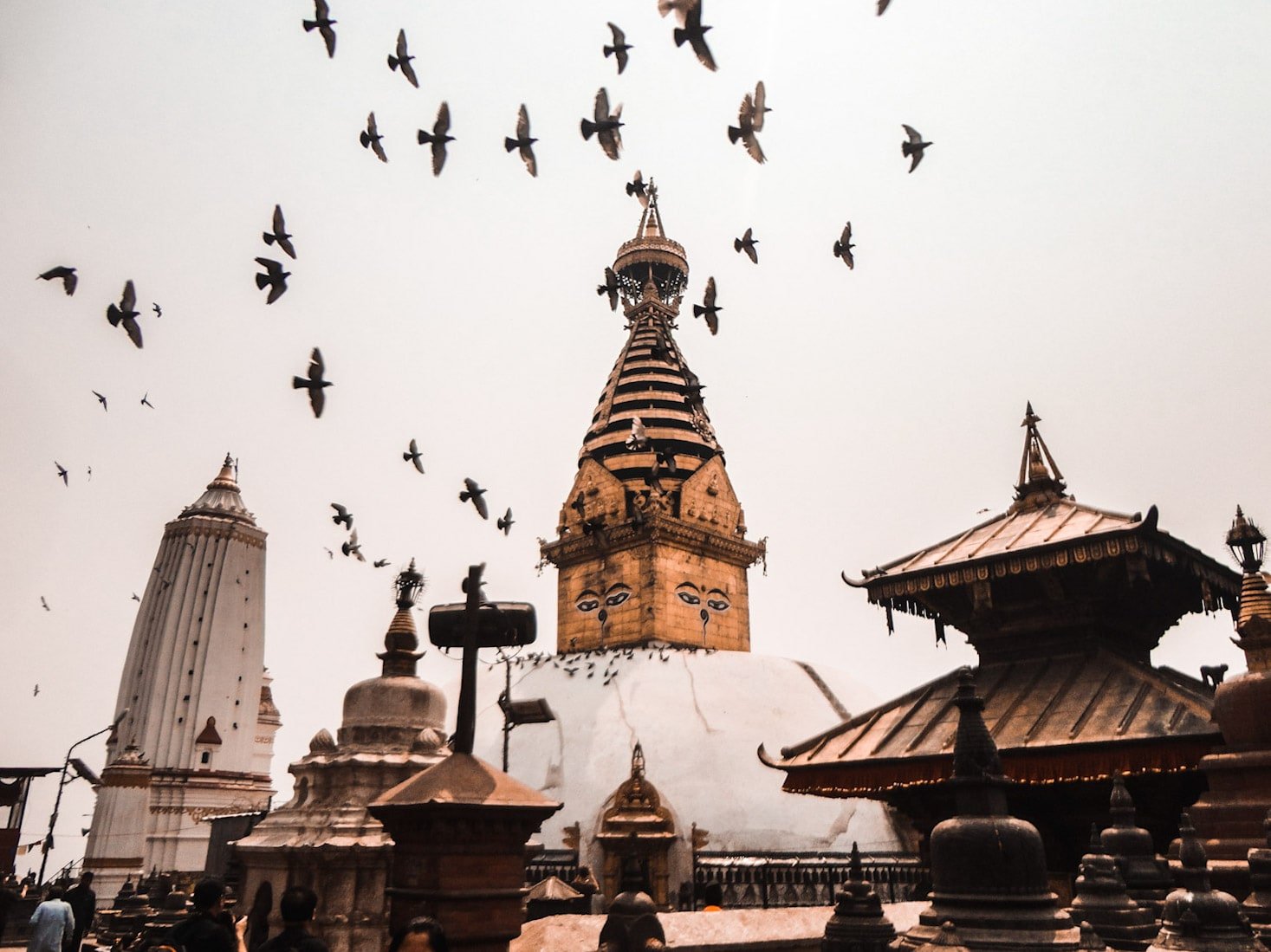 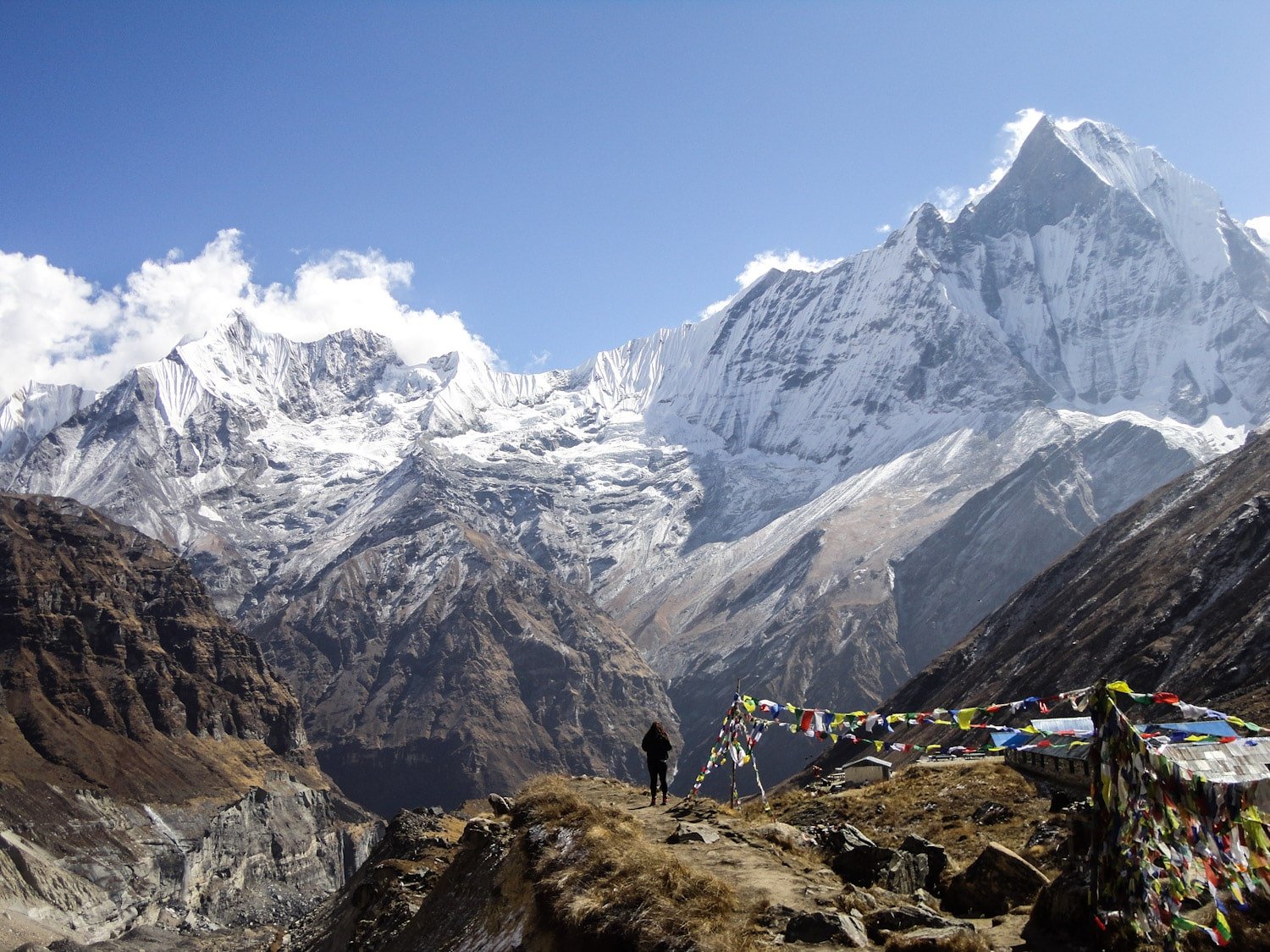 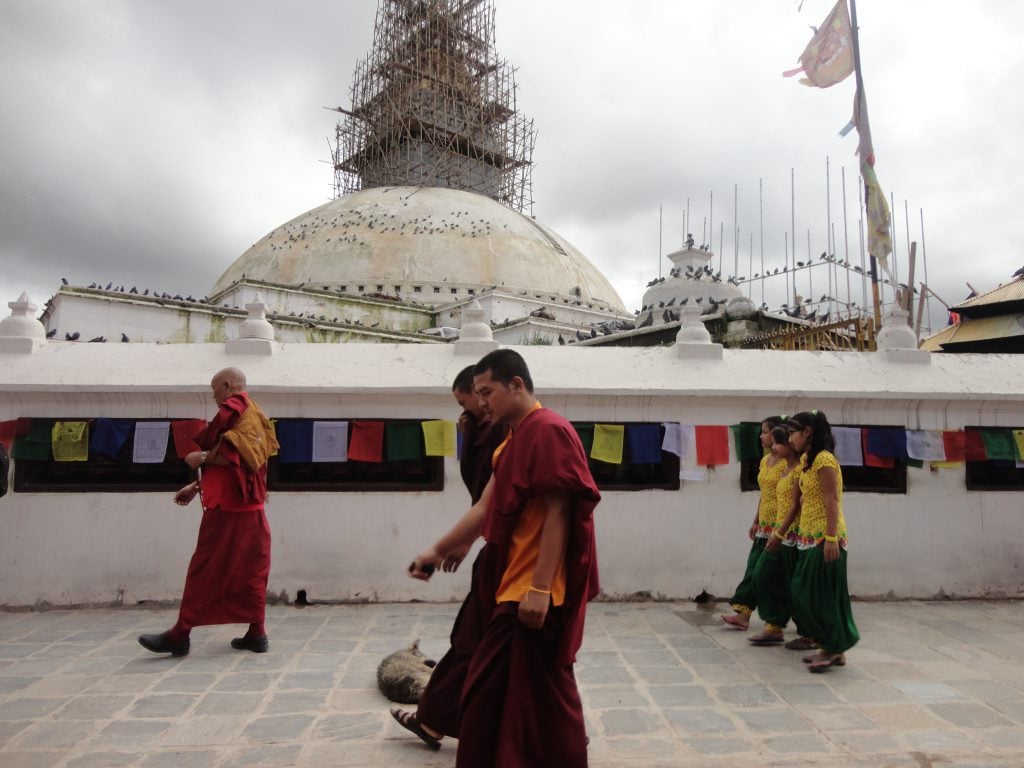 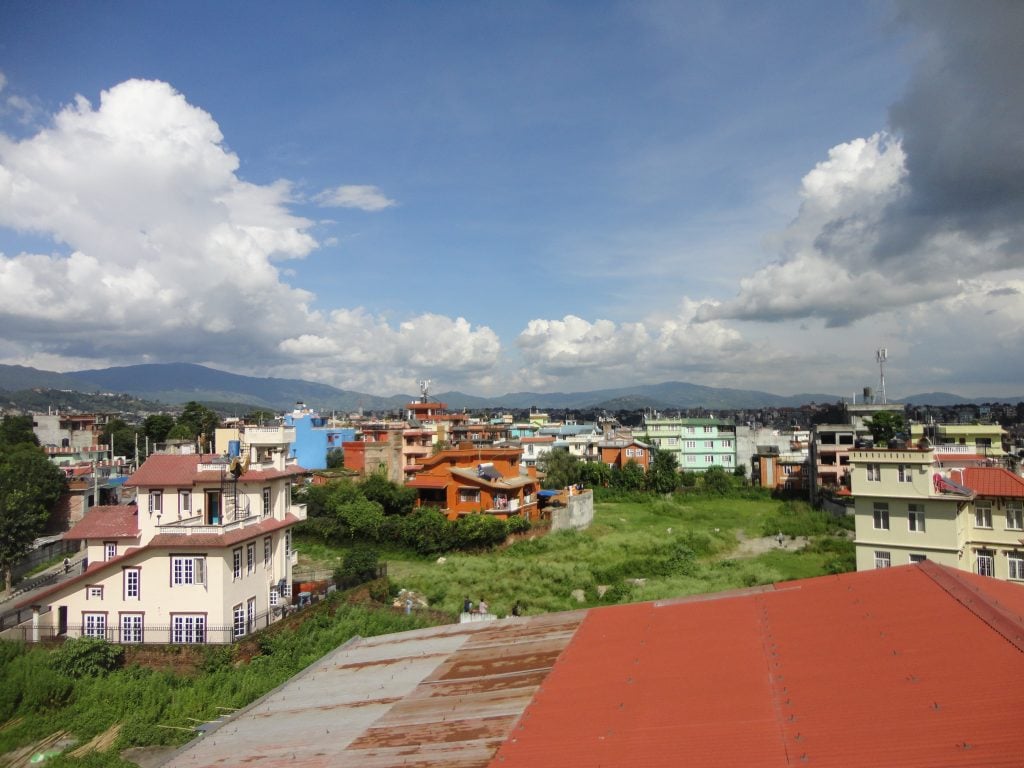 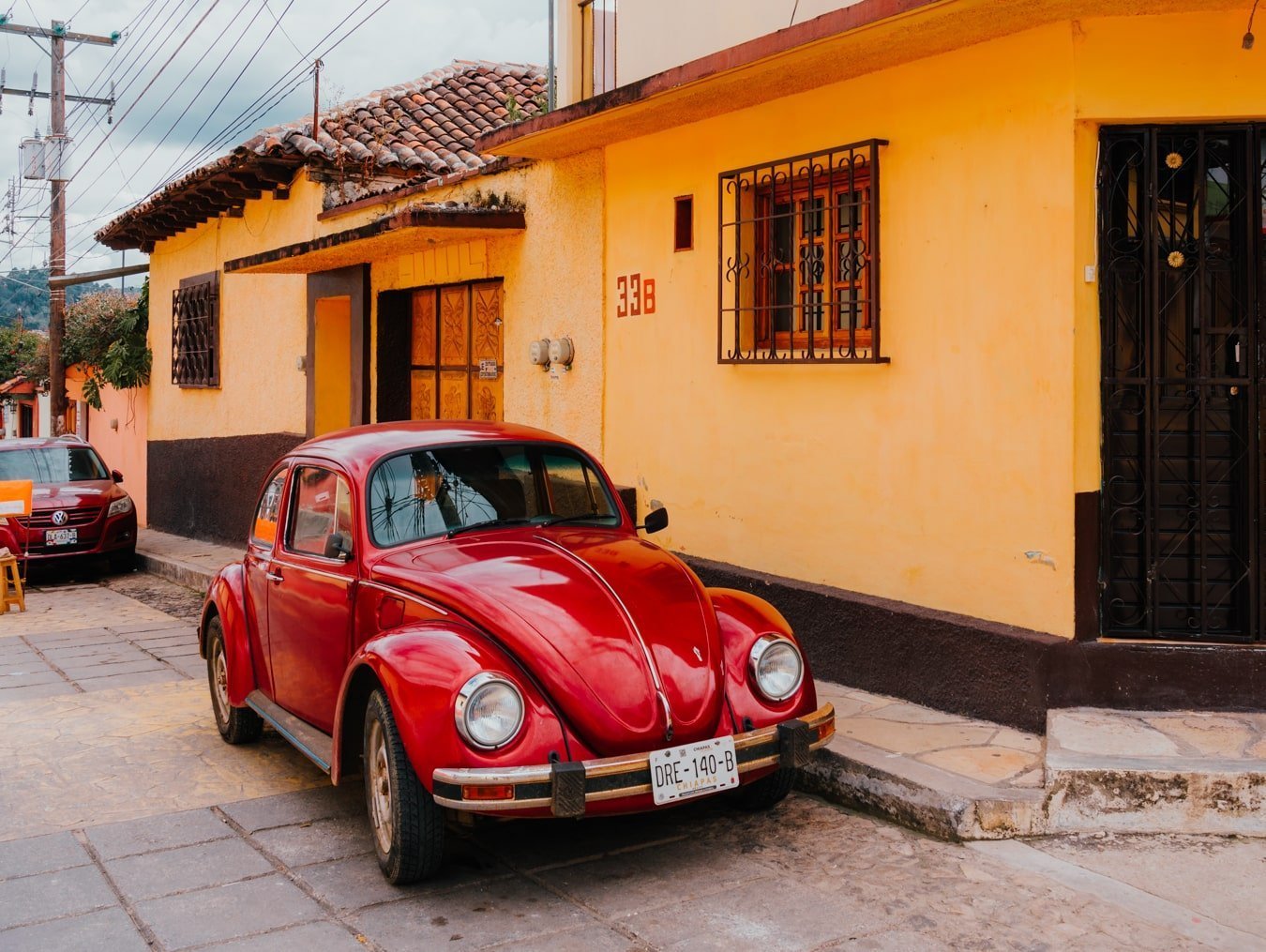 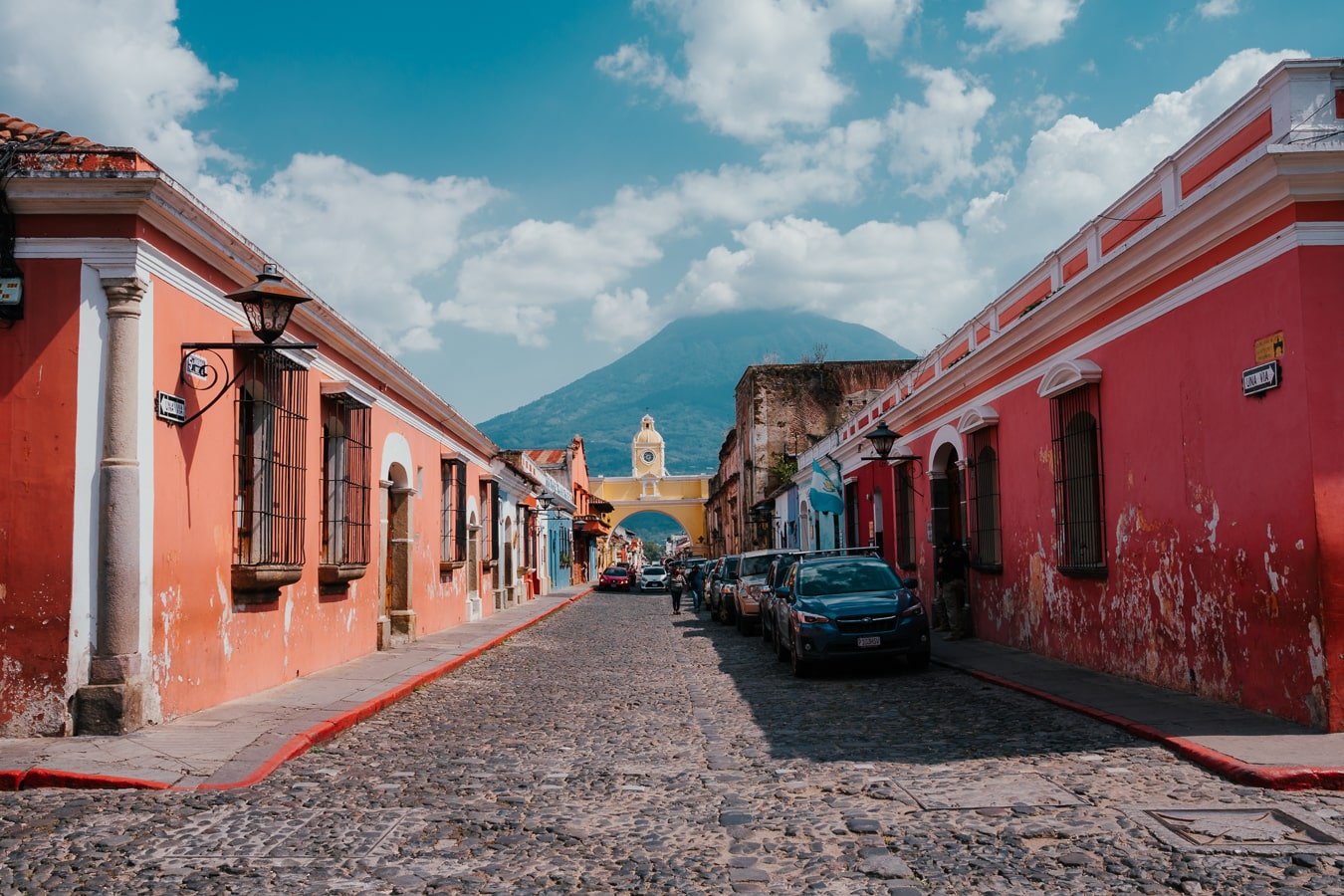 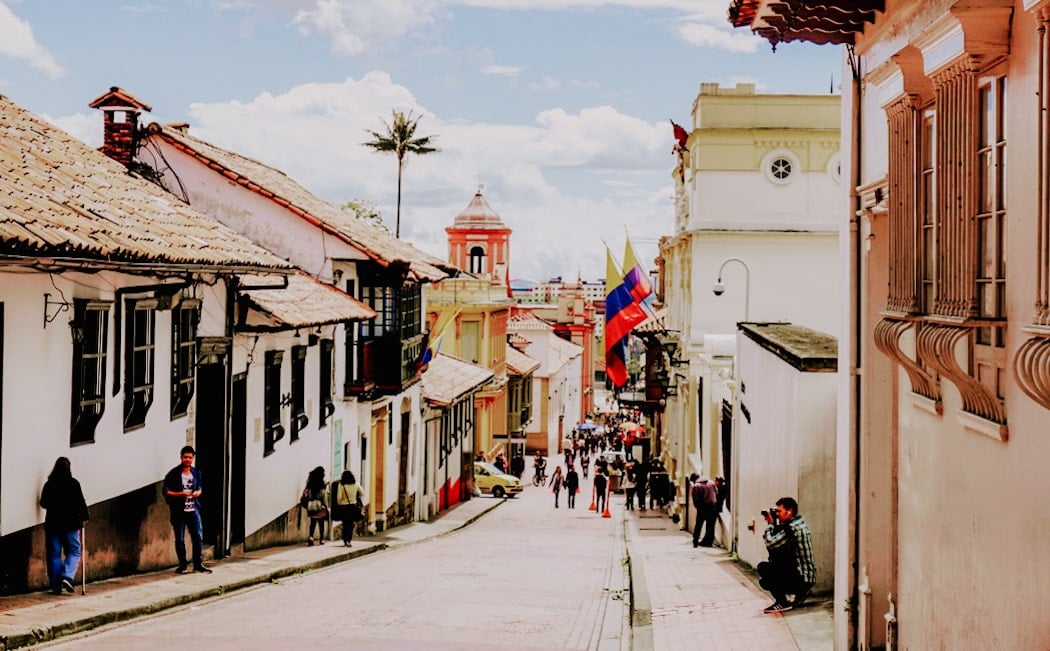