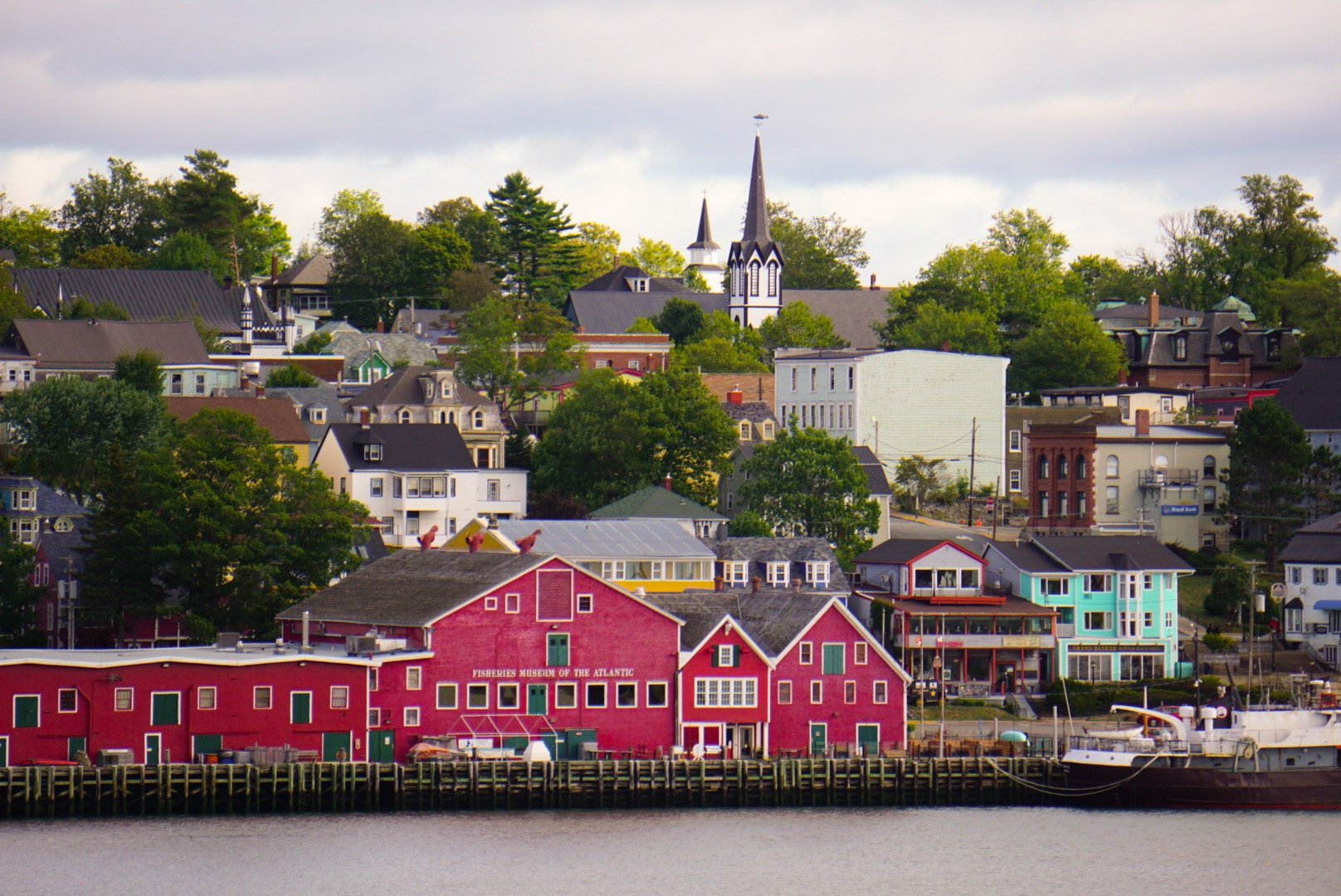 Share2
Pin11
Tweet
Share
Share
13 Shares
If you enjoy the sight of untamed craggy coastline and fresh seafood on your plate, or reading about seafaring stories and tales of pirates and buried treasure, then you’ll love exploring Nova Scotia’ South Shore region!

Before visiting Halifax and the South Shore of Nova Scotia, I had never really heard about what to see and do there.

It’s only thanks to our van life travels that we were able to spend nearly 2 weeks discovering Nova Scotia’s capital on down to the small towns that sprinkle this bucket list-worthy coastline.

Here’s our Nova Scotia South Shore itinerary which covers the most popular places to visit for a 5, 7 or even 10-day road trip! 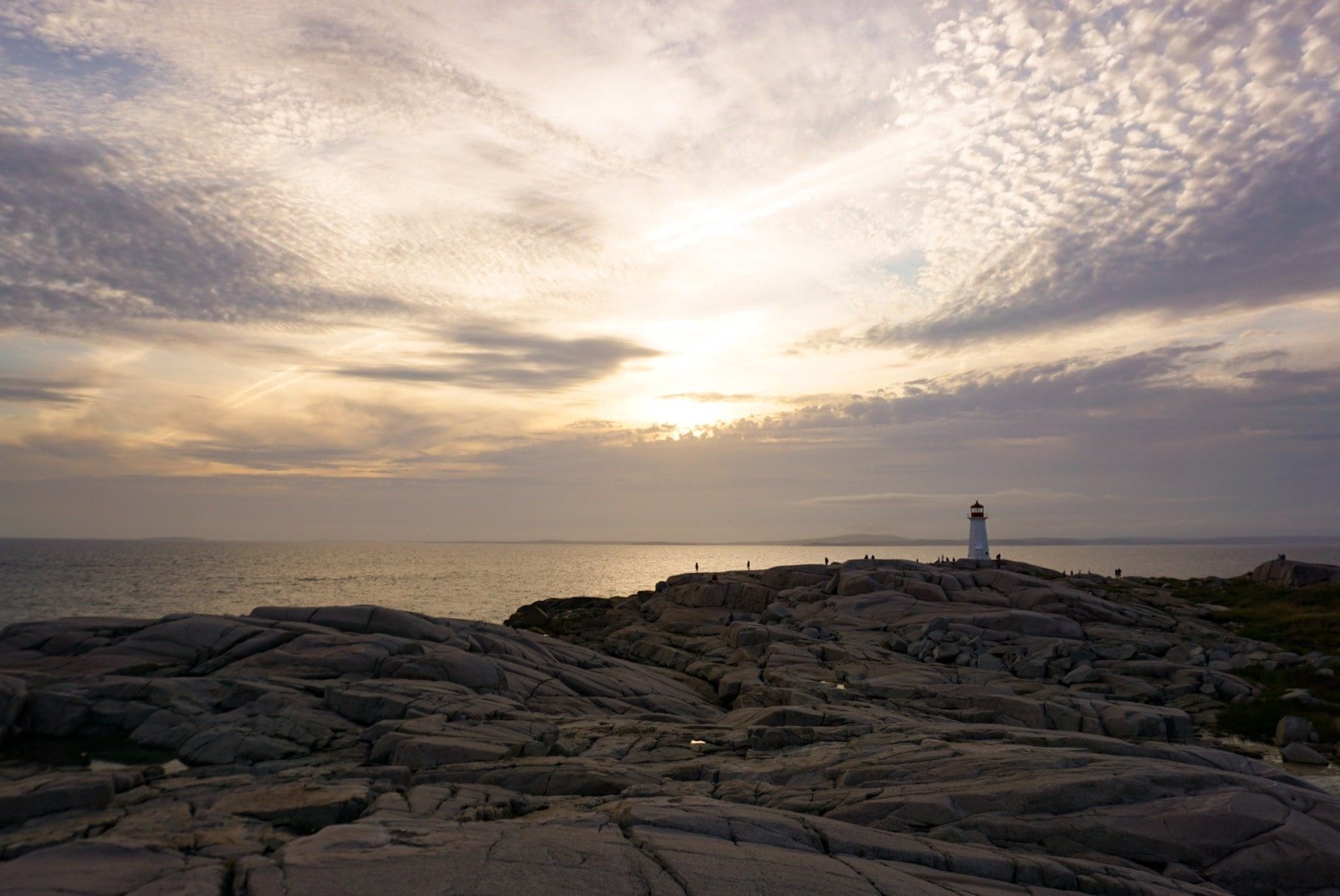 Peggy’s Cove is perhaps one of Nova Scotia’s most popular fishing towns, thanks to its iconic lighthouse which sits perched atop enormous coastal rocks.

Out of the 150+ historic lighthouses spread out across Nova Scotia, Peggy’s Point Lighthouse easily tops the charts!

Both the town and the lighthouse are emblematic of the Nova Scotian style. That is to say, it’s a very typical and traditional fishing village!

Besides the tourists who flock to Peggy’s Cove to photograph the picturesque lighthouse (which was once a working post office), the town remains very down-to-earth.

On-site is a restaurant, gallery and gift shop, a large parking lot, and of special mention – a monument and memorabilia honoring the famous sculpture and painter who lived in Peggy’s Cove – William E deGarthe.

Traveler’s Tip: Peggy’s Cove sits just under an hour’s time outside of the vibrant capital city of Halifax. You can easily rent a car and visit Peggy’s Cove in a day or less. 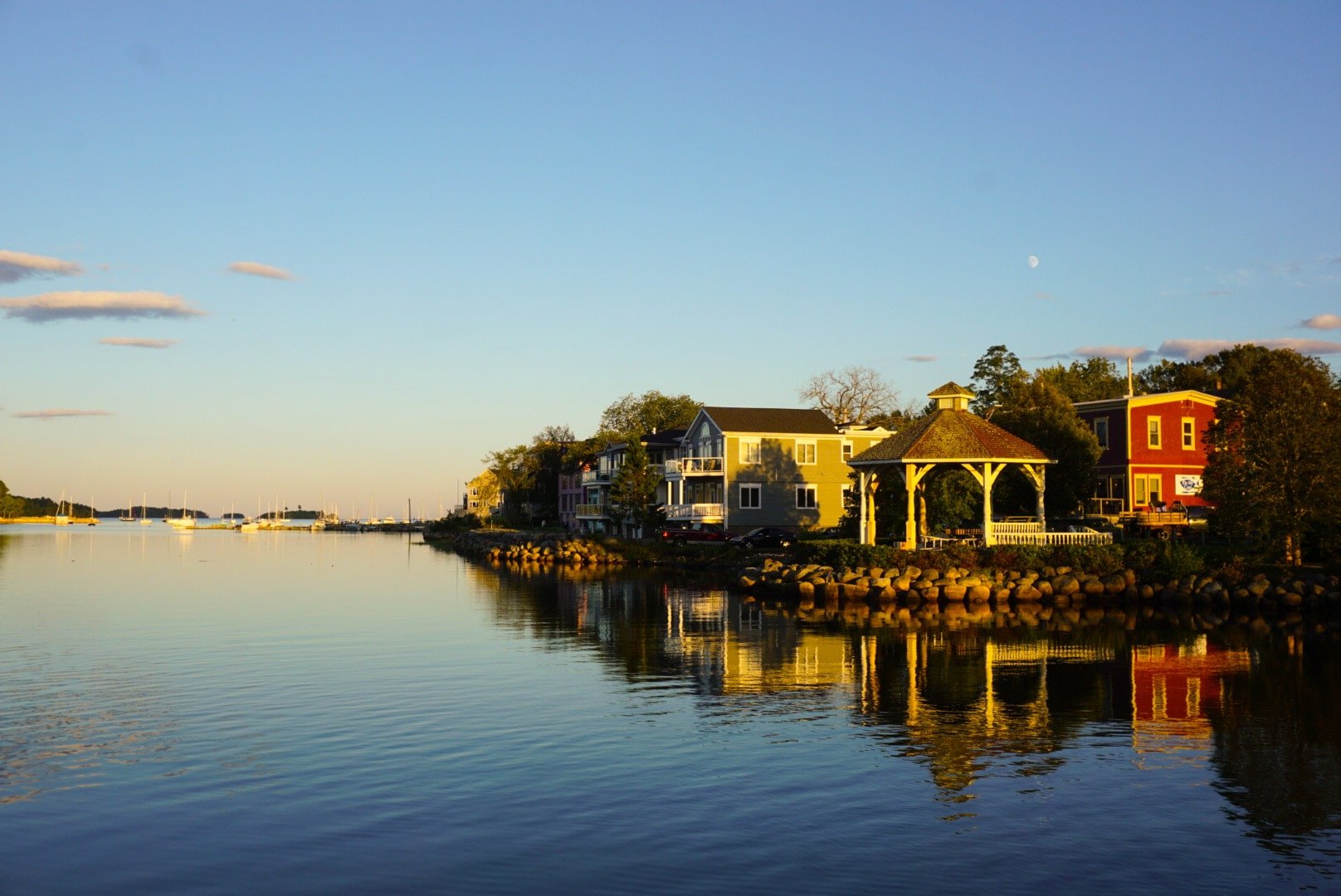 Being a fairly small town, Mahone Bay will take you minutes to drive through. But it’s likely you will react to how cute it is during those brief moments.

If you have the chance, definitely stopover to pay a visit to this endearing little town.

And let’s not forget what makes Mahone Bay so unique..!

There are three heritage churches practically standing side-by-side on the same street which famously mark the Mahone Bay skyline.

Traveler’s Tip: Don’t miss out on the special, cozy atmosphere at The Barn cafe. Their specialty coffees and cozy interior will leave you feeling warm and fuzzy.

The colorful town of Lunenburg is designated a UNESCO World Heritage Site and once you visit you immediately understand why.

On top of some of the most well-preserved examples of British colonial architecture and grid-streets, Lunenburg has two National Historic Sites and is the official birthplace of the world-famous Bluenose Schooner – the winning fishing and racing vessel now immortalized into Canada’s proud seafaring heritage (it even appears on the Canadian license plate!).

Lunenburg will trap you under its charm spell the minute you stroll down its historic harbor.

You can visit the impressive Fisheries Museum of the Atlantic right on the port or stroll down the main street on foot and pass by row after row of colorful houses, shops, and eye-catching eateries serving up fresh, local seafood.

If I haven’t said it already, I love Lunenburg! You can read all that there is to see and do in this adorable postcard-worthy town in my Lunenburg travel guide here. 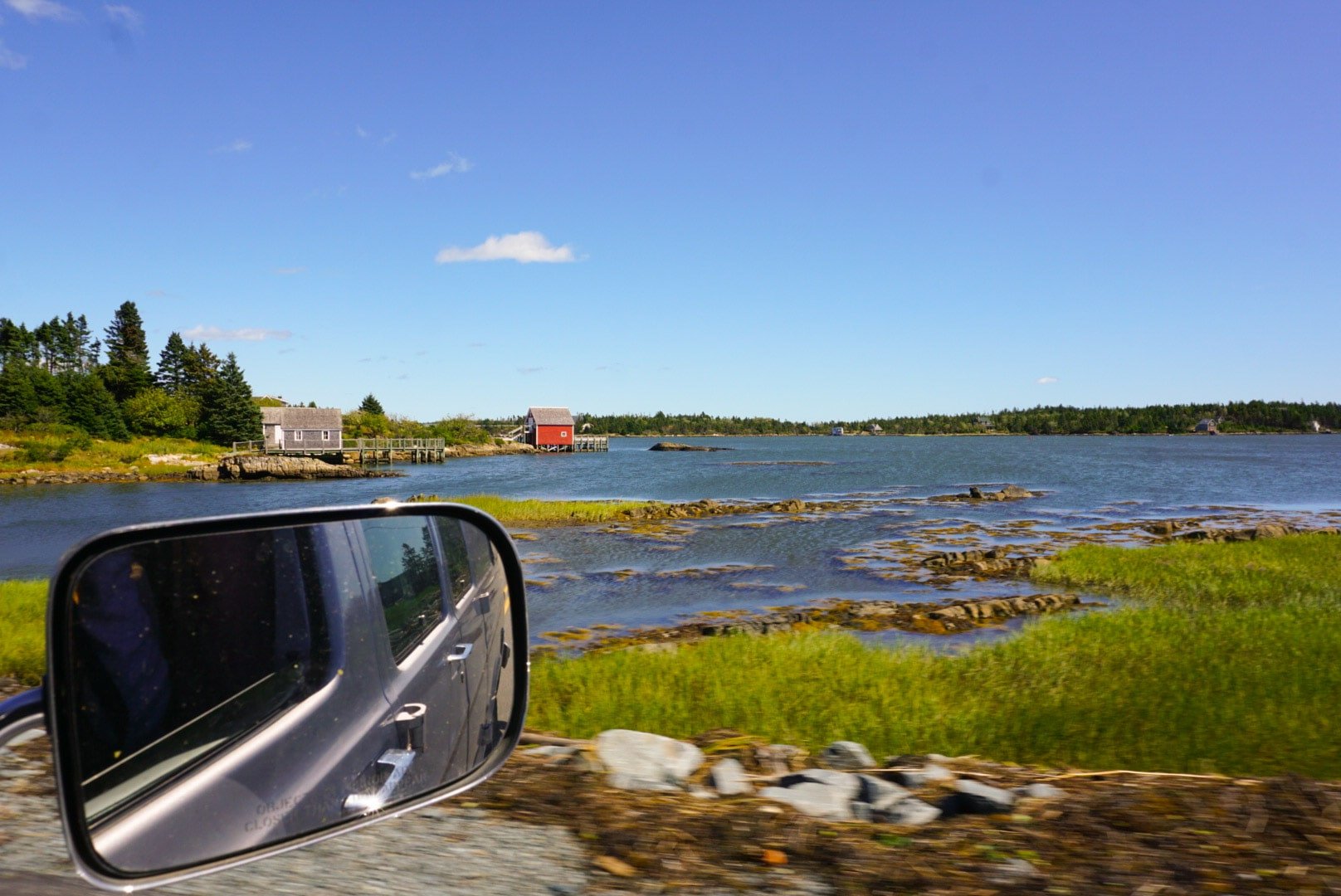 Oh, Blue Rocks. How we missed you by a hair! Blue Rocks is another quaint fishing village located only a short ten-minute drive from Lunenburg.

The town is as cute as can be with colorful sheds on the inlet, and crystal clear water which you can navigate by kayak during the summer with Pleasant Paddling.

Blue Rocks is gaining in popularity, which is why I include it here, due to its picturesque views, tranquil waters, and serene landscape.

Many artists and photographers come here to get inspired by this charming town that only a lucky few get to call home. 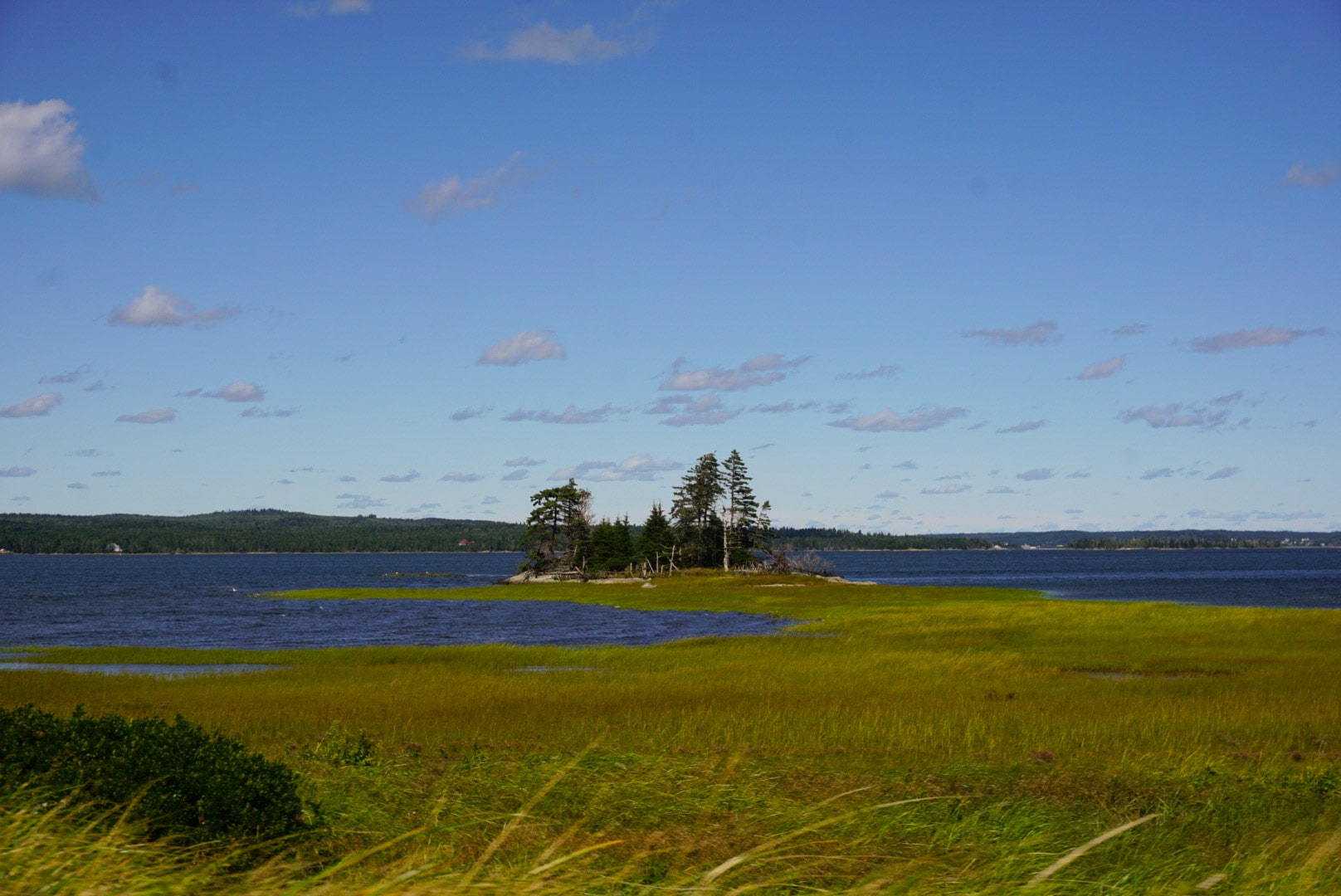 The last place we visited on our Nova Scotia South Shore itinerary before returning to Halifax was LaHave Islands and the Rissers Beach Provincial Park.

While a little out of the way from Lunenburg, it’s definitely worthy of a leisurely Sunday drive.

On your way, consider stopping at the Rissers Beach Provincial Park. To our surprise, a long stretch of sandy beach sat just on the other side of the dense pine trees along the highway.

It’s the perfect place to get out and stretch and walk the trails. There’s also a pretty trail on a long boardwalk that crosses the marsh.

LaHave Islands are extremely beautiful, and you can just drive and drive. We saw wildlife, tipped-over boats from the hurricane, on top of loads of lakes and quaint houses and even a few museums and shops along the way.

While Lunenburg, Mahone Bay, and Peggy’s Cove attract a different kind of visitor, LaHave Islands and the surrounding area truly takes you a step away from the business you of the towns. I imagine this is especially the case during the crowded summer months.

Our Nova Scotia South Shore road trip happened to fall just at the end of August – beginning of September so already there were fewer people.

Traveler’s Tip: On your way to/from LaHave Islands from Lunenburg, it’s possible to take a ferry taxi that will carry you and your car across LaHave River from LaHave town. This is super convenient so that you don’t have to drive all the way up to Bridgewater and back down. 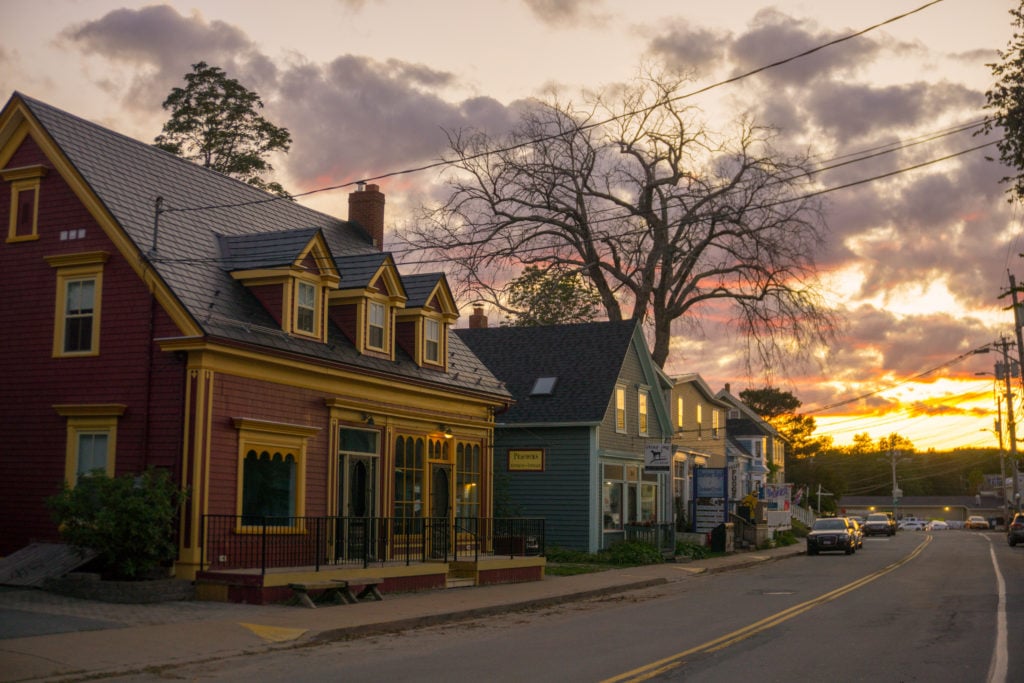 I hate to say it, but we didn’t get to see everything we wanted to see on our Nova Scotia South Shore road trip!

We also planned to visit these other must-see places:

Kejimkujik National Park – There are waterfalls and a Dark Sky Preserve here perfect for outdoor adventures!

Cycle Rum Runners Trail – Rum running is quite popular in Nova Scotia, so much they named a 100km+ cycling trail after it! You can bike from Lunenburg to Halifax via this trail.

Oak Island – Oak Island conjures up old pirates tales of buried loot worth millions somewhere on Oak Island in Nova Scotia. So many people across the last century have tried to unearth the hidden treasure and unravel the mystery! Will it ever be found?

I’m happy to report that I was able to check off a few bucket list items from my trip to Nova Scotia’s South Shore, but it looks like I’m going to have to go back! And this time I won’t forget to bring my metal detector… 😉

Do you have any recommendations for things to do and see along this Lighthouse Route?

Drop your comments below or reach out to me by email if you have questions! 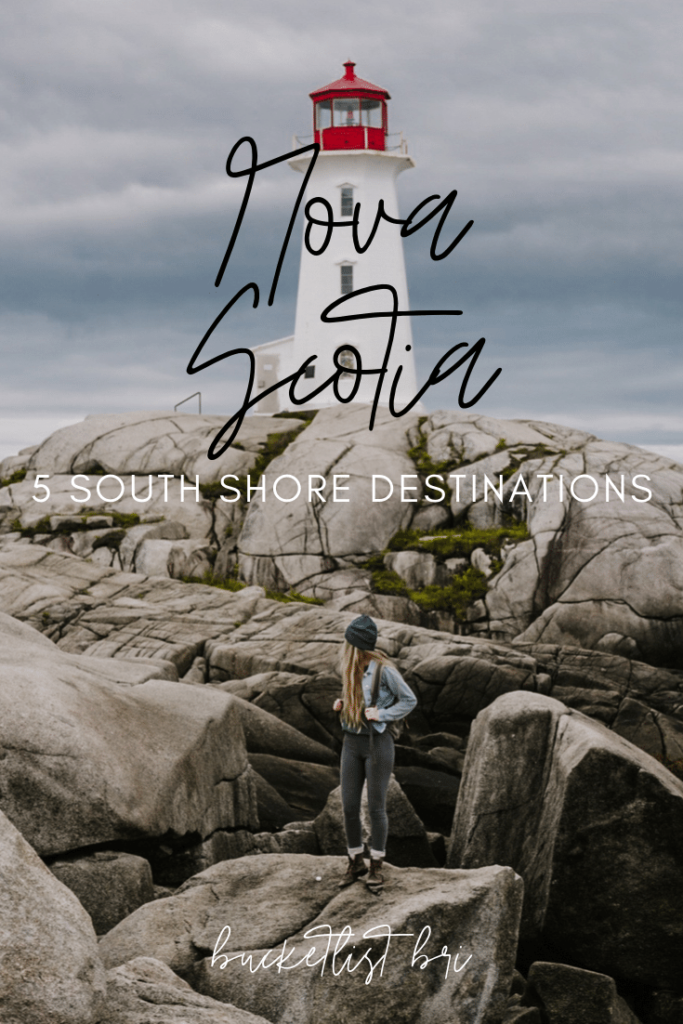 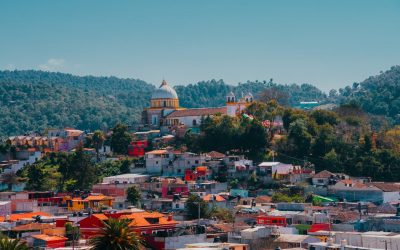 Finding out how to get from the Tuxtla airport to San Cristobal de Las Casas was the first thing on my agenda when moving to the lovely and wild...

END_OF_DOCUMENT_TOKEN_TO_BE_REPLACED 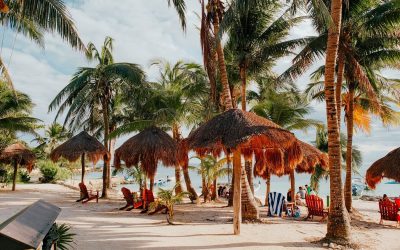 How to Get From Tulum to Akumal Beach

A few months ago, I was living in Tulum as a digital nomad and wanted to get to Akumal from Tulum to go scuba diving to complete my PADI training. I...

END_OF_DOCUMENT_TOKEN_TO_BE_REPLACED 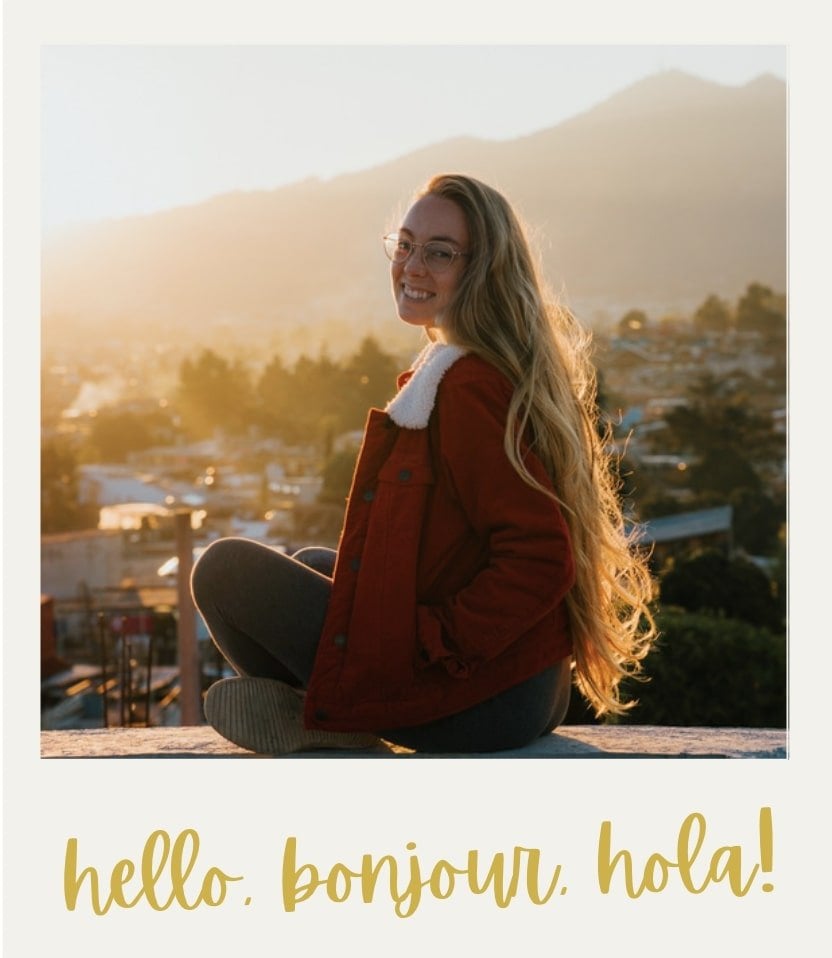